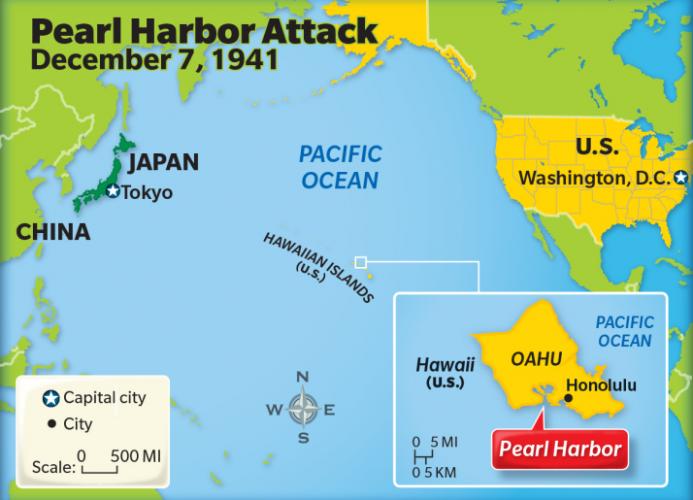 PEARL HARBOR, THE HISTORY THAT WOKE UP THE GIANT

Pearl Harbor is a strategic naval base and headquarters of the US Pacific Fleet located around the Ford islet, Oahu Island, Hawaii – approximately 2000 miles from coasts of California and 3000 miles from Japan.

Early on Sunday morning, December 7, 1941, the Washington administration learned that the Japanese ambassador had requested meeting with the secretary of state at 1:00 pm (7:30 am Pearl Harbor time); that is just 25 minutes before the devastating Pearl Harbor attack by the Japanese air force under command of Adm. Isoroku Yamamoto took place. The ambassador’s request for a meeting was only the last of many warning signs of the imminent war with Japan, misread or missed by Adm. Husband E. Kimmel and Lieut. Gen. Walter C. Short, who shared command at Pearl Harbor. In the very last hour before attack, George C. Marshall, the US Chief of Staff decided to send warning of imminent hostilities but did not telephone, fearing that his call might be intercepted, and instead sent his dispatch by telegram. Unfortunately, his warning did not reach Hawaii until after the attack of the Pearl Harbor had begun.

On Sunday, December 7, 1941, a force of about 360 aircrafts, composed of dive-bombers, torpedo bombers, and the fighters, was launched in two waves in the early morning at the U.S. naval base at Pearl Harbor. The Japanese dive-bombers in the first wave of nearly 200 aircrafts, appeared over Pearl Harbor at 7:55 am (local time), followed by the second wave of the attack which began at 8:50 AM.

The Pearl Harbor base at that time was accommodating 70 U.S. fighting ships, 24 auxiliaries, and some 300 planes. The Americans were taken completely by surprise, and all battleships in the harbor were hit with more than 180 planes destroyed and others damaged.

Most of the damage to the battleships was inflicted in the first 30 minutes of the attack. The battleship USS Arizona blew up with a devastating force. The USS Oklahoma hit by four torpedoes rolled completely over within minutes. The USS California, the flagship of the Pacific Battle Force, and USS Utah slowly sank in shallow water. The battleship USS Nevada had sustained a torpedo hit during the first wave, but its position at the end of Battleship Row allowed greater freedom of action than the other moored ships. It attempted to get underway but was struck by several bombs from the second wave of attack and was grounded at the head of the channel. The battleship USS Pennsylvania was set ablaze by bombs together with the two destroyers moored near her. The destroyer USS Shaw was split in two by the explosion. There was hardly a vessel that escaped damage and tragically more than 2,330 troops were killed and over 1,140 wounded in the attack that lasted a little over an hour. Shortly after 9:00 am the Japanese withdrew.

In his address to a Joint Session of the US Congress on December 8, 1941 US President Franklin D. Roosevelt named the December 7, 1941 as the “date which will live in infamy". The attack unified the US public and swept away any earlier support for the US neutrality. On December 8, 1941 Congress declared war on Japan. Admiral Isoroku Yamamoto, who planned the attack on Pearl Harbor would reportedly say in the aftermath of the attack “I fear all we have done is to awaken a sleeping giant and fill him with a terrible resolve.”