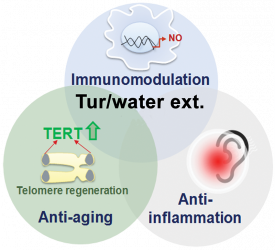 Turmeric water extract exemplifies in Tibetan and Ayurveda tradition “the essence of medicine.” The water extract is considered more biologically active, bioavailable, and quicker in action than the whole plant.

Curcuma longa (L.) or Turmeric is a tropical plant native to southern and southeastern tropical Asia. A perennial herb belonging to the ginger family, turmeric measures up to 1m high with a short stem and tufted leaves. The turmeric plant is a powerhouse for its nutritional and health-promoting qualities. The parts of the plant used for nutrition, personal care, and health care applications are the rhizomes containing water-insoluble and water-soluble compounds: curcumin and polysaccharides Ukonan A, B, C, and D, respectively.

TurmericImmune® is a brand of water extract of turmeric roots, standardized for a minimum of 20% of turmeric polysaccharides (1). The Ukonan family of polysaccharides is responsible for a unique role in tissue repair, tissue regeneration, immunity, and cumulative health effects.

A. The botanical water extracts and their health effects

Water extracts of healthy plants like turmeric have played an essential role in practicing traditional Oriental medicine. For example, in the Tibetan Medical textbook (Welcome Institute of the History of Medicine translated by Ven. Rechung Rinpoche Jampal Kunzang, 1973), a decoction is described as “extraction of the essence of medicine by boiling down (in water).”

The textbook explains the importance of decoction “When a symptom of any disease appears, one must try to prevent its spread right from the start by taking mild medicines in the form of decoction.” The water extract is more biologically active, more bioavailable, and quicker in action than the whole plant. The standardized water extract of turmeric rhizomes exemplifies a new paradigm for health care, including tissue repair, tissue regeneration, and immunity enhancement.

The aging immune system becomes progressively less efficient in repairing damaged cells, tissues, and organs. The innate and adaptive (acquired during lifetime) immune responses show age-related changes that could be decisive for healthy aging and survival. Natural or innate immunity is vital in the aging process. It depends on macrophages, which are immune cells crucial for first-line anti-microbial defense and removal of microbial, cellular, and metabolic debris. The removal of “clutter” debris is the first step to repair the damaged tissue, allowing repair mechanisms to occur. The water extract of turmeric shows remarkable property activating macrophages to clear foreign matter and improve the organism’s innate immune response (2, 3, 4). For example, there is increasing evidence supporting turmeric-activated macrophages and the dependent immunity, preventing disease origins and progression. Turmeric-activated macrophages may help clear the “clutter” of amyloid protein from the brain cells containing damage and allowing regeneration of the brain cells.

What accounts for abilities to regenerate damaged tissue are genes either activated or suppressed in their respective functions. Genes are suppressed or started under the control of mechanisms grouped under “epigenetics.” The diet can exert epigenetic control. The medical community now well recognizes that a diet rich in fruits and vegetables contributes to healthy and long life. The vegetable and fruits rich diet modify gene expression at the molecular level, facilitating DNA repair mechanisms allowing time for DNA repair leading to cellular regeneration from oxidative stress and inflammation insult. The epigenetic action of certain nutrients facilitates error-free replication of the body cells’ genetic material. The specialized genetic material called telomere secures cellular reproduction and cellular longevity. The enzyme telomerase maintains the telomere and its proper function.

Tissue repair and regeneration depend on healthy immunity, safeguarding and regulating the body’s response to inflammation. The polysaccharides activating telomerase genes are essential to a beneficial response to inflammation. There are two conditions typically unrecognized in individuals of all ages − stress and chronic inflammation −often neglected by many regardless of age. But they have been profoundly linked: the daily stress in its many forms (psychological, physical, and biological) causes inflammation as a lingering, rather than an acute process: this link and the process itself are increasingly attracting health professionals’ attention. This condition is becoming more widely considered among the medical and research community as the root cause of many chronic degenerative diseases that remain poorly understood or treated. Many botanical compounds have anti-inflammatory properties, but few of them can prevent or alleviate chronic inflammation.

Inflammation is often treated with a “band-aid” type approach to quell discomfort or immediate pain. However, it is inflammation as a lingering, rather than an acute, process that is increasingly attracting attention as damaging the immune system and immunity. It is called chronic inflammation, sometimes called inflamaging, to increase with aging. Chronic inflammation or inflamaging is considered the root cause of many diseases that remain poorly understood or treated. Cardiovascular disease, a leading cause of mortality globally, is no longer considered a disorder of blood lipids but rather a disease process characterized by low-grade inflammation of the vascular lining (endothelial cells) and an inappropriate “wound healing response” of the blood vessels.

The deterioration of the immune system and inflamaging may lead to osteoporosis (brittle bones), sarcopenia (muscle wasting), dynapenia (loss of muscle strength), and progressing frailty with aging. Similarly, inflamaging may cause degenerative disorders like Alzheimer’s disease and cancer, a dysfunction of the immune system reacting to the organism’s and central nervous system’s chronic inflammation. Cancer is still a leading chronic degenerative condition worldwide.

* These statements have not been evaluated by the FDA. This product is not intended to diagnose, treat, cure or prevent any disease.